It takes dedication, commitment and determination to make it to the top in elite sport. But it takes extraordinary effort if you’re trying to manage it in two sports, as well as balancing a career. Adele Nicoll can’t be dissuaded though, she’s an advocate of dual-careering as she tells us at The Transition Phase. We caught up with Adele whilst she’s out in China for the Winter Olympic test event. 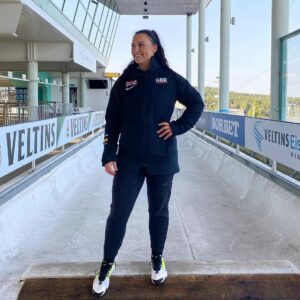 As the 24-time Welsh Champion for the shot put indoors and outdoors between 2009 – 2021, Adele’s prowess as a power-based athlete was noticed by GB bobsleigh, who head hunted her and convinced her to take up a dual career as an elite level summer and winter sport athlete. In her first year focusing on performing out on the ice, Adele also broke the 17-metre barrier for the first time in her career, solidifying her case for selection for the 2022 Commonwealth Games. We asked her just what her achievement meant to her.

“I put my focus predominately on bobsleigh training ahead of the World Cup this winter, but I was still very mindful that there was a Commonwealth Games coming up. A couple of years ago I was plateauing and unable to improve on my previous best throw of 16.34, but I knew that there was more in there. I knew it wasn’t my full capacity and that I was a better athlete than that. So, when I started to get a lot stronger and more powerful from the bobsleigh training, it was just about working on some technical things and trying to find time to balance both. It meant so much to me to break that 17m barrier, after all I dedicate my entire life for moments like this. It was very emotional.” 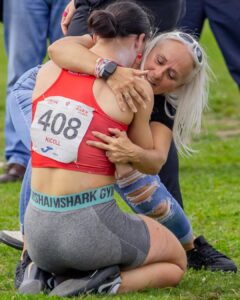 Adele moments after the furthest throw of her career thus far.

Here at The Transition Phase, we are advocates of dual-careering, and so we wanted to learn more about how Adele manages to find the balance that is enabling her to have great success across the board. It was interesting to hear about the ‘productive’ ways in which she manages her time.

“My life has changed a lot over the last 18 months. I left my full-time work, which was in Cardiff, left my apartment, moved back to Mid-Wales to focus on sport, and worked enough to be able to live, but not too much that it was taking away from training. I was juggling working in the psychiatric hospital, PTing and my own training. It was gym, track, throws, push, technical training for bobsleigh on repeat. Every minute of my day has been used productively over the last 18 months. When I say productively, I also mean rest. Resting is also a good use of the time and so important because without the rest, I wouldn’t be able to do all the things I have on my plate.”

Time management and organisation are skills valued by many organisations, and skills that athletes almost indefinitely possess having to balance their sport amongst various other commitments. Adele agreed, explaining that having multiple focuses can be a good thing, and in some ways has helped her to perform better on the track and ice.

“I’ve always worked, even when I was much younger, I was washing pots and pans or making coffees. I think for me, having that focus away from sport is something that has helped. I live my life out of a diary, so I have to write down what I’ve got to do in that day, even if it’s a simple task. I have my weeks planned and organisation is a big skill in terms of being able to lead a dual sporting life and working life.”

It’s a wonder that there are enough hours in a day for Adele to get everything done she’s got on her plate. We were intrigued to here whether she would advocate this clearly very busy dual-career lifestyle, and whether she would encourage other athletes to think about working alongside their sport too?

“Yes 100% I would advocate dual-careering! People throughout my career have tried telling me I’m doing too much, but every person is different, you can’t tell me what’s too much for me and I can’t tell you what’s too much for you. I’m able to manage because I do make sure I plan enough time to rest, and sleep is a big thing for me. I would definitely advise people to work because it teaches skills outside of sport that will be beneficial to your development as a person. The working world is a way for athletes, especially from individual sports, to learn how to do deal with people. It just teaches you the value of money and other life skills that sometimes you might not learn if you didn’t work alongside sport.”

Working alongside training and competing at an elite level is a great way to build on your skillset and build your network outside of sport, you can read more about the benefits of dual careering here (link to previous TTP article).

It was great to catch up with Adele whilst she was out preparing for the Olympic test event, but before we let her head off to training, we asked if she could leave us with her top 3 tips for athletes that are considering a dual career!

Number 2, don’t be afraid to break the barriers or the norms. Don’t think it’s not possible because no one else has done it before you. Just go for it, because no one person is the same.

Number 3, have a focus outside of sport, because if you don’t, when you retire you could become lost. Especially coming from a psychology background, I’ve had colleagues and peers that have done a lot of research on mental health effects on sports people that retire and don’t have anything to go into. It can be quite a lonely place but having something as an escape alongside your sporting career can be so positive and help guide you later in life. “

We loved hearing Adele’s insight into her fantastic dual-career, and all of us at The Transition Phase wish her the best of luck out in China!