Tom Farquharson, from court to consulting

Former Professional Tennis Player, Tom Farquharson, Talks to TTP About his Transition from the Court to Consulting.

Former Professional Tennis Player, Tom Farquharson, Talks to TTP About his Transition from the Court to Consulting.

The Transition Phase had the pleasure of speaking with consultant and former professional tennis player, Tom Farquharson, as he reflects on his final few years of his career. Following his retirement, he has since moved into several new careers and is relishing the chance of a new opportunity in Consulting. Despite the unfortunate end to his career, Tom has grabbed all opportunities he’s been given with both hands and spoke to us about the last few years of his life.

What would you say were the highlights of your career?

“Starting from when I turned professional at 17, I played on the ATP circuit for probably about 6-7 years, achieving a singles ranking of top 400 on the men’s tour. It was good; I was travelling around the world playing tennis on the circuit. The biggest highlight for me was at 18 when I won the junior Wimbledon title – that was really special. There were a few other moments, perhaps not on stages like that, but competing professionally on the circuit. I won a large tournament in Dublin which was a personal highlight of mine.”

Did you have time for doing much off the court while playing professionally?

“During this time, I actually deferred my A levels, doing them over 4 years to give myself a bit of leeway to play and to travel. For me, this was a really good decision; it gave me another focus off the court, and in a different way, so I am really glad I did that. After I finished my A levels, I went full time with tennis. I always think it’s good to have something off the court to focus on, like having studies. Having something else you’re working towards is really positive I think, it gives you a different focus.”

Did you find it hard to balance it all?

“It’s a challenge definitely. I think with a lot of athletes it’s a full-time job that you’re doing, or even more so I would say, as it’s not a 9-5, you’re a full-time athlete every hour of the day. I think a lot of the skills I built up through sport, I ended up applying – for example having the discipline to commit to something, or have a goal you want to achieve with your studies, and the ability to follow through with it. As an athlete your career is not your whole life, so you have to be aware you can do things outside of the court or the pitch that will help you further down the line. It’s thinking about your long-term prospects as well as having another focus outside of your sport.”

When did you know it was time to step off the court?

“It’s never an easy decision for anyone, but I had a lot of injury problems. I had surgeries and ups and downs for several years. After my second surgery, I had to ask myself some tough questions. The tennis tournament calendar was so intense, it required you to play 40-45 weeks of the year and I had to make that decision whether I was going to be able to fulfil a calendar like that consistently over the next few years. I just knew my body wasn’t going to be able to do that. It was a tough decision, but ultimately every athlete has to make that decision at some point, I just had to make it a bit earlier on in my career.”

Did you receive any career transition support?

“I think family and friends helped. It’s a difficult time. I think everyone who’s been involved in professional sport has had one focus up until that point, and we are often very goal driven people.  So, when that changes, you have to start thinking ‘okay what next, what now?’ Family and friends helped in terms of getting me to think about what avenues I could go down, but for me at least, there wasn’t a certain path I knew about or should take, I had to jump into the next step myself.

What did the next steps look like for you?

“I decided I wanted to go and study. I wasn’t sure I was ready to step into a job straight away. It gave me a chance to explore the business world and a new city, as I studied Business and Economics in Amsterdam. Stepping away from tennis, I wanted to immerse myself in a new world. For me, I didn’t feel there were specific avenues for after my transition, but I was open to exploring the world.”

How did you find studying overseas and that period of time in your career transition journey?

“Throughout my tennis career, I travelled throughout Europe a lot and the Netherlands was always a place I really liked, and Amsterdam is a great city. I actually came across studying abroad at a university careers fair, because there were international unis there too, Amsterdam being one of them. It appealed to me; with tennis I considered what it might be like to live internationally, and I thought, ‘I am already jumping into the unknown, so let’s jump into it a bit further and see what happens.’ So, I went and studied business there. I knew I wanted to go into business of some sort, but that’s all I really knew, so I think it was a good course to take as it was very broad, and it gave me chance to look into lots of different areas of the business world. I did a bachelors there and then a masters in International Management.”

“At the end of my bachelors, I did an internship at a start-up in Amsterdam which was my first experience of being in the workplace. Then during my masters, I worked at a big med-tech company, doing an internship there in a more corporate environment. Then, after graduating, I worked for a year in Amsterdam, which was a really great experience, it was a brilliant place to work. It was at the end of the 12 months that I decided to come back to the UK.”

Tell us about what you’re doing currently and how you’re finding the working world.

“The experiences I had at Amsterdam started to make things a bit clearer on what I was looking for. Coming into consulting has given me the opportunity to work across lots of different industries, and it’s been a good chance to get a broad understanding of how to build businesses. I knew that was the avenue I wanted to go down. Consulting is challenging, but athletes are always looking for a challenge and it was the right time for me to find my new challenge. The good thing about consulting is no day is any like the other, new challenges are arising, you’re always learning and it’s a great opportunity for you to grow. That’s what I was looking for, so I am very happy to have come back to London.”

Are you finding your background in professional sport is helping you in your new role?

“Yes definitely. The skills you learn in sport you can transfer to life in general, but also particularly with work, it’s one of the less tangible aspects when you make the transition and it’s hard to see that. But then with more experience, you start to realise that a lot of the skills that you pick up in sport are transferrable; you may not be holding a tennis racquet, or playing on a football pitch, but those transferable skills definitely serve me well in terms of adapting to work.”

Upon entering the world of consulting, were you concerned you lacked experience or had a sport-heavy CV?

“I think as an athlete you maybe don’t have the knowledge when applying to jobs around how you should present yourself, what your CV should look like and what value can you bring etc. I think that’s also something I had to learn for myself, about how you can best use your background and how to create value from it in a traditional CV. That kind of advice would have been really useful. It’s basically about trying to show the employer what value you can bring based on your sporting background. Having help in reflecting that in CVs and in applications would’ve been so useful in hindsight.”

What one piece of advice would you give somebody preparing to retire from sport and make their own career transition?

“For me, trying to take on as much information as you can. If I think about going to university overseas, I stumbled across that by being open to different opportunities. When you’ve come from sport, you’re so focused on a single goal that when you make that transition out, it’s important to be open to very different things. Your passion for what to do next might not be as clear as what it has been for your sport. So being open to experiences, taking in as much information and meeting as many people as you can in that initial ‘transition phase’ is really important.”

While elite sport doesn’t last forever, the last few years of Tom’s professional career shows us that the end is nothing to fear. Whether your retirement is pre-empted or organic, expanding your knowledge and network, and establishing some ideas around what your future holds, will help to ensure that the end of your sporting career is, in fact, the launchpad in to your new and exciting chapter.

Tom is currently working as an Analyst at Elixirr 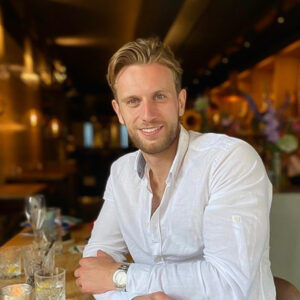