The Importance of Future-Proofing: with Myles Pearson

Myles Pearson has had an on-again-off-again relationship with elite sport for over a decade. With inconsistent support and funding, it took him years to strike a healthy balance between sport and life but now, with his own home, a job he loves and years of international competition under his belt, Myles has got it right. It hasn’t been a smooth ride and his story underlines the importance of making preparations for the future in the early stages of your career.

At 17, Myles was juggling college studies with wheelchair rugby training, and was by far the youngest member of the GBWR training squad. In 2011, a year before the London 2012 Games, GBWR brought him to Twickenham and, overlooking the stadium below, offered him a contract to play wheelchair rugby for Great Britain. The only snag – Myles was asked to drop out of college to focus on training.

Despite advice from his older teammates, Myles accepted their conditions, left college and trained full-time with GBWR. “On paper, it wasn’t the best decision, but there were so many emotional factors involved. Older players gave me advice but when you’re 17 and offered a contract to play for your country, your mind is made up.”

So, Myles was selected for the Games and represented GB. It was a fantastic experience but the team finished 5th, which was a disappointing result, and the atmosphere after the Games was uneasy. The team had no performance lifestyle support or ‘life after sport’ advice. “There were so many consequences of that one bad result. Players that had supported me retired and I had nobody to lean on. It was a no-man’s land and I was too young to know how to handle it.” 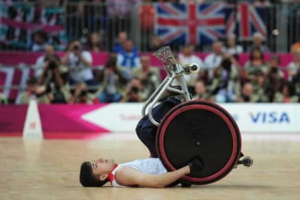 For the next five years, Myles lived with the ripple effects of the contract he signed at 17. In 2013, new GB coach Paul Shaw encouraged Myles to go back into education, so he moved to Southampton to both study business and continue training with the Solent Sharks rugby club, as well as GB. Being thrust back into education, however, Myles struggled to keep up without A-Levels. After a year, he changed direction, starting a course in sports journalism. “I love writing and I’m very creative. In college, I wanted to study journalism, but now I was so far behind in every dimension: academic writing, computer skills, socially… I was always playing catch-up.”

Myles briefly stopped training with GB in 2014 to focus on his university studies but, in his words, the damage had been done. After struggling through the first year, Myles left university and tried to find a job. He bounced between a few positions but, without the basic skills he needed, nothing stuck. “I’m a quick learner – I’m not daft! I just needed a little patience and the understanding that I’ve not been in a work environment. Unfortunately, some companies haven’t got time to teach you things you need to know, so I was let go because I wasn’t keeping up with the work.”

In 2015, Myles made arrangements with GB to refocus, train harder and get back on track for the 2016 Games in Rio. Again, Myles moved away from the friends he’d made, and relocated to Lancashire to train with a higher level club, West Coast Crash. His girlfriend moved with him and supported them so that he could devote his time to training. With no other commitments, Myles made every effort to make it back onto the GB squad but, in November 2015, he was dropped. “After all I’d sacrificed, they didn’t want me back”, he said, and watched as his former teammates competed at the Rio Games without him. 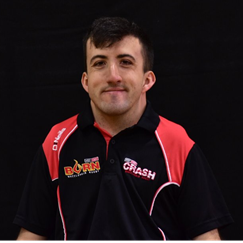 Like London four years earlier, the GB wheelchair rugby team left Rio in 5th place, without a medal and they lost all their funding. It felt as though history were repeating itself, as GBWR faced an uncertain future. With no money for support staff, there was no advice on how to handle downturns in the sporting landscape. “Sports in which the funding goes up and down so quickly are the worst to get into. It’s so risky. You don’t know if you’ll have money coming in a few months down the line. It’s impossible to relax and at the same time you don’t want to lose your place on the team”.

Things Look Up For Myles

In 2017, Myles’ luck finally turned, and he landed the job he still has today. Myles started working for Lancashire County Council, processing data. His colleagues made time for him, showed him how to use different software and taught him office-based skills. “I learned such essential things, even just how to speak and present myself in a business environment. I wore a suit and tie to work for the first time. They had the time to nurture me and they let me continue training for GB, too. I’m so grateful. It was exactly what I needed.”

And 2017 turned out to be Myles’ year. Not only had he secured a job he loved, he was selected to represent GB at the European Championships where the team won gold. The highlight of his career so far, it became apparent that success in one area of life carried over into another. At last, Myles was striking the balance.

When I asked Myles if he regretted leaving college and signing his contract ten years ago, he laughed and replied “That’s very difficult to answer. Looking back, it might not have been the best decision, but I just love the sport. Representing my country is the greatest privilege, you know? Nothing makes me happier. It’s the environment I feel the most comfortable in, it’s what I know. I’ll always want to be connected to GBWR”.

Despite over a decade of lurching from highs to lows, scraping to keep a roof over his head and sacrificing his education, social life, friendships and relationships, Myles remains devoted to his sport. “I know I can go back to rugby if I want to but only because my job and home life are so secure now. I’ve worked my way up [at the Council], so I can communicate with them about the flexibility I need to train. Now they know me, they understand how to help me with my dual-career and it also looks great for them that they’re supporting an elite Paralympic athlete, so everyone wins.”

“The key thing is that there’s no loyalty in sport – no matter how many sacrifices you make, they can always turn around and say ‘no thanks’. It’s so important for young athletes to create a future”. 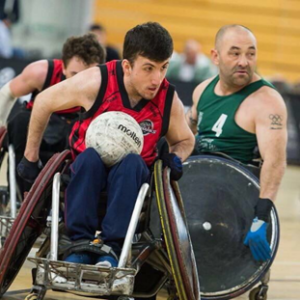 At TTP, our aim is to make sure nobody has to struggle through the transition from sport without the right support. We believe all athletes need and deserve the best advice when it comes to dual-careers and life after sport. If you want to find out more about how we can support you, get in touch with us today.