TTP alumni, Abigail Robson, talks to us about her new career and how she’s finding the transition

TTP alumni, Abigail Robson, talks to us about her new career and how she’s finding the transition

“It’s great, the company is really understanding of people being able to continue with a sport and have a career at the same time. It’s definitely the right environment for me anyway.”

Abigail grew up with sport. Netball was her sport of choice. From the age of 14 she would travel for hours from her home in Bournemouth to Bath to play different teams in the area, which would eventually see her get selected for England when she reached the Under 17 age group.

At 16, she decided to make the move to Bath and played 2 years of Netball for the TeamBath U19s squad, alongside her international duties. She then ended up leaving for University in Bristol where she studied at UWE for 3 years and continued to play internationally for England, progressing into the U21 squad. Then came her big break and transition into the National Vitality Super League, where she was a staple part of the TeamBath AllStars until recently.

“I moved out of England age groups and so I played super league all through uni. I finished my degree and went back to Bath and worked there as a sports grad last year which meant I could still play super league for bath, in what turned out to be a very different year. In some ways COVID made the sport so much more professional because every game had sky coverage, and everyone was talking about netball; there was a massive hype and you could feel the difference even though we had no crowds.”

Abigail played for the AllStars team for a year after graduating before making her recent move to London and to new Vitality league side, Surrey Storm.

The next step after her time at Bath was trying to get a job that would allow her to dual career and continue her netball career at Surrey Storm, which seemed a daunting task when she was unsure of what career path to go down.

“TTP were great, they asked what I wanted to do and I said I don’t really know, I just know that I enjoy talking with people. They asked me to do a couple of things which were really helpful. I felt at ease when it came to my interview, the process went really quickly. I had the conversation with the TTP team on Tuesday and Wednesday, by Thursday I had an interview booked and then a job offer on Monday. The Transition Phase helped me big time, they sent me so much information and detail that it couldn’t have gone wrong.”

The former England Netballer is now working as an Associate Consultant at Concilium Search. When asked to reflect upon her own journey, she left us with this piece of advice for other athletes thinking about a similar career transition:

“I think for me, I was comparing myself to friends who haven’t dedicated their lives to sport and so I thought they have much more work experience. But what I didn’t understand until I started work was that your sport is valued by your company, because things like determination are valued, so believe in yourself.”

“I’ve now moved across to London and so I’m playing for Surrey Storm. I’m a training partner this year, so I won’t be playing in any matches. That’s the stepping stone to a new franchise I guess. I also now have my job at Concilium, and they’re really great. Thankfully I’m still able to play netball. The company is really understanding of people being able to continue with a sport and have a career at the same time. It’s definitely the right environment for me anyway”

Abigail spoke honestly about some of the challenges of a dual-career lifestyle, though still assuring us that she is tackling it head on and taking it all in her stride.

“I can work in the office and also from home, so I train on Tuesdays and Thursdays, which are really late days for me. I get in at midnight from Guildford to London. However, because I have that ability to work from home the next day, it’s not too bad – certainly manageable.”

We were really pleased to hear that Abigail is being supported in her new role to be able to pursue her sporting endeavours. Here at The Transition Phase, we only foster relationships with those organisations who are advocates of elite sport and are actively looking to hire athletes. 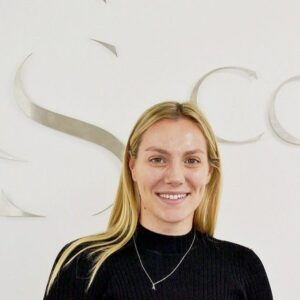