“Everything has fallen into place. The puzzle pieces have aligned, it’s just a very exciting feeling!”

At the start of the year, as she headed into the last semester of her masters, Emma was in a ‘horrible’ position searching for jobs.

She had been applying to roles since February, sitting multiple interviews that she felt would never allow her to grow, climb the career ladder or cultivate the life she truly wanted for herself.

After applying to over 250 jobs across every industry imaginable, the doubts started to creep in. She feared that nothing would work out for her, leaving her feeling discouraged.

It wasn’t until she got in contact with The Transition Phase that things started to turn a corner for Emma;

“When Ben from TTP contacted me, we had a very casual conversation. I felt like I was talking to a real person for once, not just another ‘bot recruiter’ who only wanted to look at my CV. It was a very natural kind of conversation” she told us.

After being put forward for multiple interviews with some of our student-athlete seeking clients, it wasn’t long before Emma secured herself an offer.

“I knew from the start I was going to have a much better experience. After being set up with a bunch of very exciting interviews, I actually made it to a final stage round with one company.”

“Within a week and a half of working with TTP, I had an offer on the table that I was happy with”.

As an elite level figure-skater, Emma had become well accustomed to performing under pressure and delivering when it counts. The skills she picked up on the ice saw her sail through the process with us and secure herself a job for the autumn.

Starting out as a figure-skater when she was just 4 years old, heading to the rink with her sister, she fell I love with the sport. Growing up in Boston, US, Emma’s prospects of progressing in the sport had a ceiling, with ice skating only looked at as a pass-time leisure activity.

Winning her first state title at the age of 15, Emma’s career continued on an upward trajectory, so and she made the move to the University of Vermont to pursue her passion.

Spending just over a year with an entertainment-based team, she continued her journey along the east coast, transferring to Merrimack College where she solidified her status as one of the strongest performers in the collegiate system.

“At Vermont, I was on a crazy performance team called the ice cats. We would do all kinds of exciting stuff like lifts and backflips on ice. We were really an entertainment team, performing in the quarters at Hockey games.”

After a year, I transferred to Merrimack College, where I competed in the same collegiate sector along the east coast between Florida and Maine. I was pretty much a podium placement at every competition I did, which was so exciting, and my team qualified for nationals. 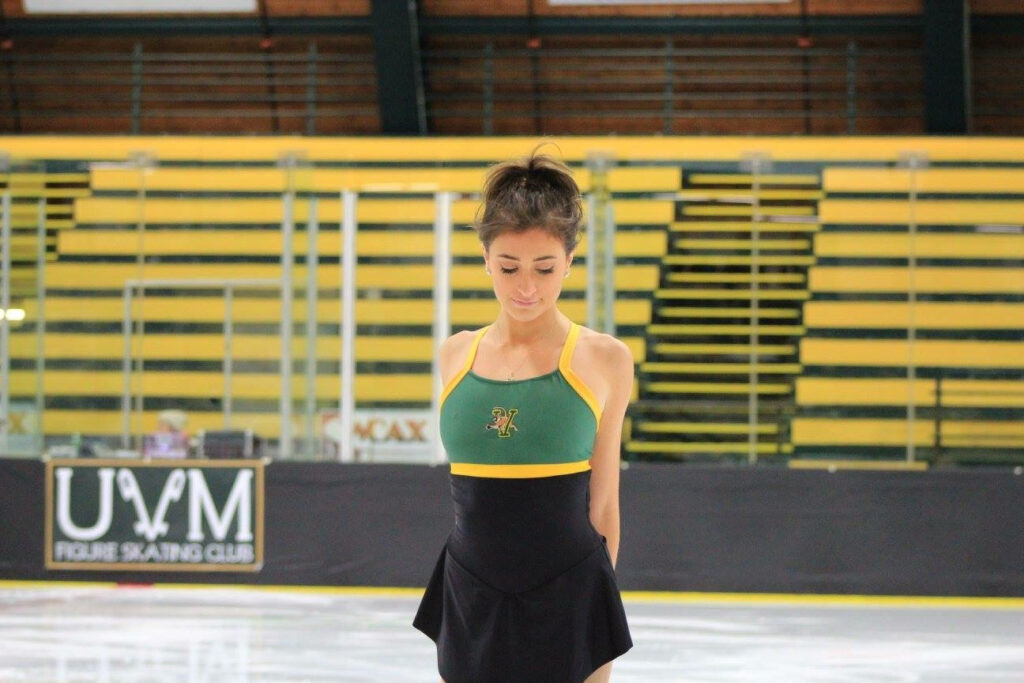 As Emma’s skating career was reaching it’s pinnacle, the pandemic hit forcing her to complete her degree like many student-athletes off campus.

By the time graduation came around, Emma had ‘aged out’ of the sport in a world where the leap to Olympic level senior competition is vast. This gave her time to think about her next steps, and inspired a move to the UK for her Masters she explains;

“I’m from Boston, which is about a 10th of the size of London, and we’re kind of a homogenous community. I just didn’t feel that that was something that I wanted to continue, living there and doing those monotonous daily things that everybody does, living to work not working to live.”

“So I felt that, you know, coming to London would give me a fresh start. I could really cultivate the life that I wanted to, and so far I have had such a good experience. After living here for 6 months I made the decision in my mind that I wanted to stay, and so I needed to get serious looking for a job.”

“TTP were so instrumental in helping me find my role, I can’t wait to start in with my new company. Everything has fallen into place. The puzzle pieces have aligned, it’s just a very exciting feeling!”

We are so excited to see where Emma’s career takes her – a true TTP success story on and off the ice!